I'm cutting it awfully close. The Sole Burner 5K was almost a month ago and I still haven't written a race report.

But since I have the afternoon off - conceivably to get ready for Ragnar Chicago - I'm sitting down and writing it. So here goes, I'm pretty sure it'll be a short one since it was almost a month ago. 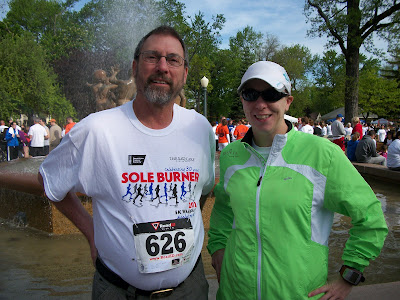 So between my double race day in Ohio, where I ran the Capital City Half Marathon and the Cinco de Mayo 5K, and the Sole Burner 5K I didn't run. Call it a recovery week I guess. Honestly I'm not sure why I didn't run. I just know I didn't.

Race morning I went down to the downtown Appleton park where the start/finish area is and we met up with my brother and his family. There was chit chat, some pictures taken and pretty soon it was time to line up. 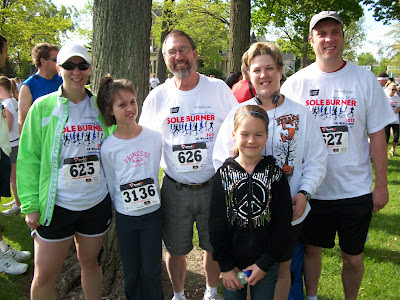 I positioned myself somewhere in the middle of the pack, just really not wanting to get stuck behind a bunch of strollers and walkers. The gun went off and I just stood there. With a large crowd of runners - there were about 7,000 people running/walking - it took awhile to cross the starting mat, I'd say about 3 or 4 minutes. But eventually I did and I started to run.

Due to some construction, the route was changed up a bit this year and I really didn't study the course map before hand. So I was kind of running blind during the first 2 miles, not really knowing where I was going. I didn't like that part of the course too well - too many turns for my liking, especially during the first mile.

But right before Mile 2 we hit the downhill. I like hills. And I was aggressive, passing people. And of course at the bottom of the hill is where they set up the water stop. I grabbed a cup, walked for 10 seconds and started to run again.

I kept wondering when my brother (with his long legs) would fly by me, but he never did. I was holding a decent pace, right around 10 minute miles.

And what goes down, must also go back up. I hit the Heartbreak Hill and gutted it out. It was harder this year since I haven't done as much hill work. But I refused to walk the hill. Now, when I got to the top? Yes, I took a short walk break, mostly to get my heart rate down a bit. Then it was just two more blocks and I was cruising through the finish line.

Now, according to my Garmin, I crossed in 31:30. According to the "official" results, I finished in 30:30. So I'm not sure where that extra minute went. Either time I'm happy with, especially considering the top of the hill walk.

After I finished, I headed over to where my mom was camped out and cheered on the rest of my family to the finish. My brother finished a minute or behind me (but actually had a faster finishing time since he started behind me). The reason he never flew by me? About a mile in he hit a pot hole in the road and ended up twisting his ankle pretty badly. Ouch.
Posted by Badgergirl at 4:54 PM

We have matching jackets.