I've been on a bit of a running/working out hiatus for almost the last two weeks. 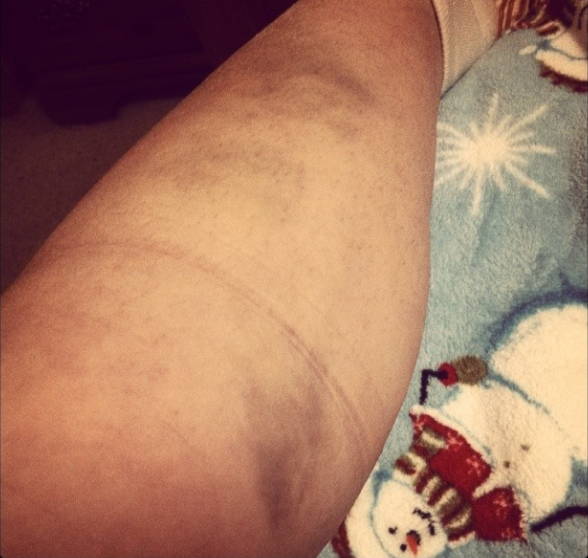 Photos don't do the bruises justice.

That's left me with some pretty epic bruises from my ankle to my knee. So I babied it for the first three days. I was all set to go for my long run that weekend, but then I got this weird twinge in my knee (the one that was in the shower). I hurt. So I decided to take the time off, rest it and ice it.

It finally felt better this past weekend, but I had a family emergency come up and I wasn't able to get a long run in.

My training plan said today was a cross training day and I was excited to get back to P90X, but then the weather happened. And after the winter I've just been through - 50 or more days when the temperatures were sub-zero, lots of wind - meant I spent way too much time on a treadmill or running in circles on an indoor track.

So when it's 53 and sunny out on March 10, I didn't bat an eyelash at changing my training plan. I'm all for being flexible.

Especially when this is the forecast for the rest of the week:

I snuck out of work a little early and headed home to run. I can't remember the last time I dressed in capris and a short-sleeve T-shirt for a post-work outdoor run. Oh yeah, that was the other thing. Daylight! And the sun was still shining for an hour AFTER I was done running.

Since I wasn't sure how my beat up legs were going to feel, I took the run nice and easy. It was four glorious miles. The kind of run I needed to remind myself why I like to run.

Now if only the snow and cold would disappear from the forecast. At least until December.
Posted by Badgergirl at 10:01 PM

it was 80*+ in Raleigh today. #justsaying