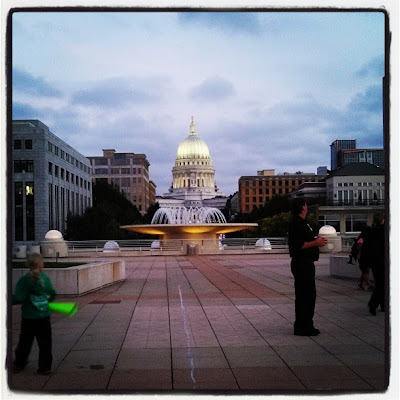 Good morning, Madison. Looks like a great day for an Ironman.

It's become a September tradition. Take the second weekend of the month, head down to Madison and cheer on athletes as they tackle the 140.6 miles of the Ironman Wisconsin course.

This was my third year down there and the second that I've been down there to cheer for my good friend Myriah's husband, Josh.

I headed down to Madison Saturday afternoon. The original plan was to get a 12-mile run in before I left, but I woke up to a pretty constant downpour with thunder and lightning for the 3 hours or so that I had blocked off for the run. So no run, but I'd be doing plenty of running around during the race Sunday. 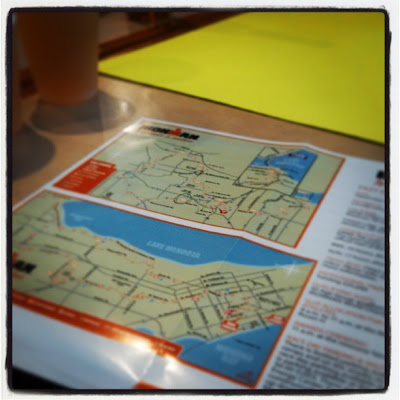 
I met up with my friends at their hotel, we got food and then plotted our spectating plan for Sunday. Like last year, Myriah and Josh would be leaving the hotel early and I'd be in charge of getting their families (about 15 of them) from the hotel to the Monona Terrace in time for the swim start. And for the second year in a row, I'm proud to say that I got them all there and no one was lost in the process!

Unlike last year, we decided to stake out spots on the upper level of the Monona Terrace for the swim portion. While it wasn't as crowded as the helix, it kind of lacked the energy that the helix has. But on the plus side, it was easier to make it from the upper terrace to where you could see the athletes running to get their bikes in transition (which is a nightmare if you're on the helix). 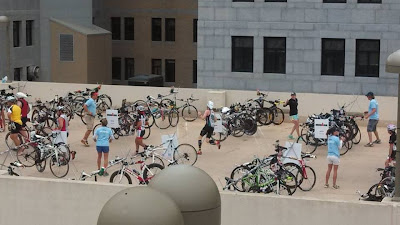 Josh heading to his bike.

After Josh was off on his bike, we rounded everyone up and grabbed the shuttle bus back to the hotel. We then loaded up the three vehicles and headed out on to the bike course. 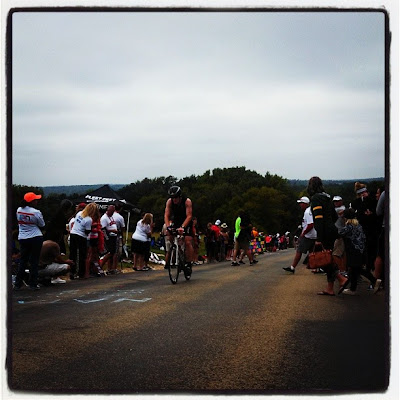 Bikers coming up the hill on Timber Lane.

We first caught Josh around Mile 45 on the hill at Timber Lane and he looked like he was having a blast on the bike. And he was flying. As in, going so fast we didn't make it to stop #2 in time. We were getting out of our cars as we saw him fly around the corner. Oops. So it was back to Timber Lane - a little past the hill - to wait until he passed the Mile 90ish mark. And yup, he was still looking good and having fun when he flew by us. 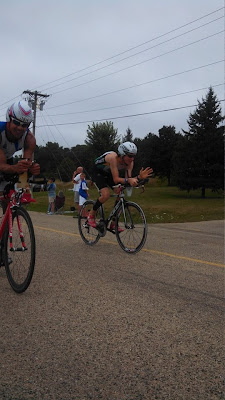 Josh smiling and waving on his bike.

Then it was back to the hotel. Everyone else got on the bus to head back to downtown and I jumped in my car to head downtown to find a place to park.

Then the fun part started. I met up with my friend Jeff and we chased Josh around the run course on our bikes. We caught up with Josh about 6 times on each loop. He looked great on the first loop and went through some ups and downs on the second loop, but Josh still finished strong. 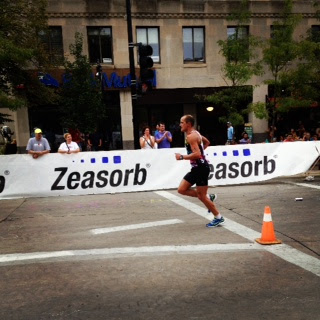 Eventual men's winner heading out for the second loop of the run.

I met up with Myriah and Josh after he crossed the finish line and then I was off to try to find my friend Steena, who was tackling Ironman Wisconsin for her first time. I saw her somewhere around Mile 15 and while I would have loved to stick around to watch her cross the finish line and become an Ironman, I knew I needed to take off. I had a long-ish drive ahead of me and I was starting to get tired. And I was hungry. So I headed home.

But it was another great day at Ironman. So many stories. So much inspiration. People just like me who put in the training, the ups and downs, the sweat, the aches, the pains. The good runs and bikes, the bad ones. All of it came together for them on Sunday.

The tackled the 140.6 miles and they became Ironmen. And once again, I'll take that experience with me and remember it when I get to Mile 11 of a half marathon and start hurting.
Posted by Badgergirl at 9:00 AM

You need to train more just to spectate an ironman. It's a long day for you out there too, I know. How fun! I'm going to spectate IM Chattanooga next year, and maybe volunteer so I can sign up early for 2015