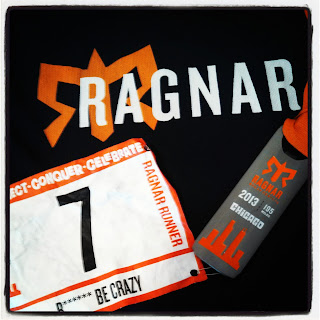 I'm finding it hard to put those 60 or so hours I spent with 11 other amazing people into words.

In short, it was everything I could have asked for and more.

It all started Thursday afternoon when I headed down to Milwaukee to meet up with a chunk of my teammates and pick up our vans. The six of us who would be spending the next two days in Van 2 got lucky and ended up with a 15-passenger van. Yes. 15-passenger. And me? The girl who drives a Ford Focus? I drove that spaceship to Madison. And didn't crash. Although Garmin Dave might have gotten a bit snippy with me at one point.

Once we got to Madison, we checked into our hotel and met up with our remaining teammates before heading out to Noodles for some pre-Ragnar food. Then it was back to the hotel and time for some more team bonding. Which of course involved beer.

At some point, the Van 1 teammates decided it was time to sleep - something about having to run early in the morning - so us Van 2 runners continued our bonding and drinking downstairs in the hotel lobby. 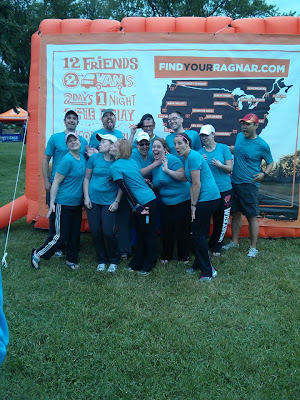 The next morning dawned bright and early. Our runners would be starting at 8 a.m., but we all met up at the start line for pictures. Before we knew it, Runner No. 1 was off and so was Van 1. 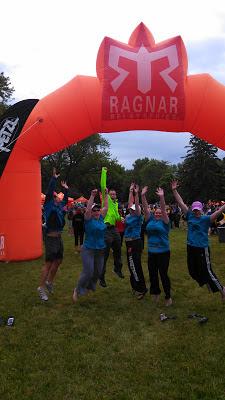 We jumped. Or tried to.

For the six of us in Van 2? First there was an attempt at a jumping picture. Then it was time for food. One power outage - while I was in the shower - and one fire alarm - while I was clothed only in a towel - later and we hit the road for Lake Mills to decorate the van and wait for our teammates. 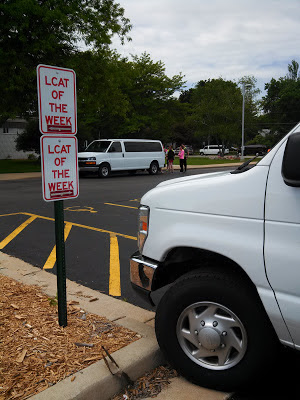 We got prime parking at Exchange 6 in the Lake Mills High School parking lot. Seriously. Every Ragnar van wanted the LCat of the Week spot (which apparently didn't matter too much since our van got hit by another big white Ragnar van). It's harder to draw Mr. Potato Head than you think.

After going through the safety briefing, we got down to the business and decorated the van. There were boxes to check off when legs were finished, a "map" from MadTown to ChiTown, Mr. Potato Head and some feathery ta-tas. 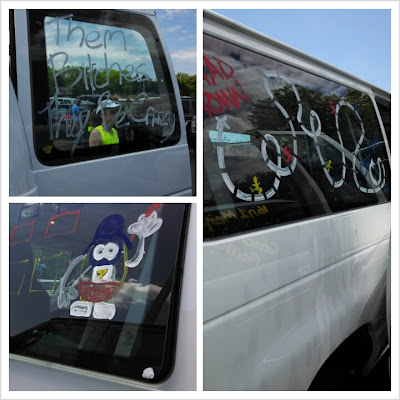 Eventually we met up with our Van 1 teammates and we went to wait for Runner No. 6 to come in. And with minutes to go, we were left scrambling after hearing that Leg 7 would be 3.5 miles longer due to a detour. We switched up runners at the last minute and then it was time for Van 2 to begin our first set of legs! 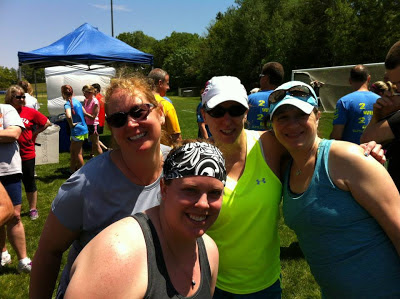 Van 2 girls! Who knows where the boys were.

We leap frogged with out runners along the routes and cheered them into the exchanges. Eventually it was time for my first run, a 5.9 mile jaunt along the Glacial Drumlin Trail. A straight shot. No chances of me getting lost. Even though it was only 6:30 p.m., I would be finishing just after the nighttime hours went into effect, so I was decked out in my neon yellow tank, my reflective vest and headlamp. Oh, and I was still wearing my sunglasses. Because, you know, the sun was still shining.

I finished my leg and handed off the slap bracelet to Runner No. 12. After he was done, it was time to find some food. After we pulled into Exchange 18, we all tried to get a little bit of sleep, knowing we'd be running our next legs in the middle of the night.

Tried is the key word. My eyes were closed. But it was that restless sleep. Tossing, turning, hearing all the voices. I maybe got an hour or so. But at least I was able to close my eyes in the dark.

Sometime in the middle of the night, Van 2 started running again and before I knew it, it was 4 a.m. and time for me to run again. This time it was 7 miles through the neighborhoods in Racine. My longest leg. It was cold when I started running - like see your breath cold - but I warmed up quickly. And if I was worried about getting attacked, I shouldn't have since I was armed with a plastic knife from Noodles (thanks to a teammate). On this leg, I'm proud to say I registered two kills. And let me tell you, they were hard!

But 7 miles after I started, I was done and handing off to Runner 12 and shortly after, we were greeted with this: 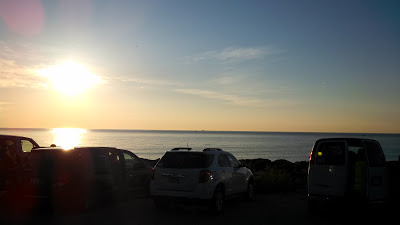 There was another stop for food, and even though we all were starving, we barely touched the food once it came to the table and I may have had my first regular Coke in more than 8 years.

We headed to the last major exchange to wait for Van 1 to finish up and then we began our last legs through Illinois. My 4.9 mile leg was through Evanston. Had I not been paying attention to the sidewalk in an attempt not to fall flat on my face, I would have been greeted with some pretty amazing scenery as I ran through some pretty swanky neighborhoods with huge houses. 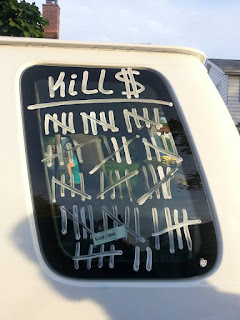 I'm responsible for five of those marks.

I grabbed one kill while in sight of my van mates. What? The dude slowed down to walk. He was right there in front of me. I sped up. He decided to start running again. I couldn't let him stay in front of me. So I sprinted. Passed him - barely - and then slowed down and watched him pass me up. Dude. Still counts as a kill.

When I was in front of the Northwestern University football stadium, some lady told me it was "just straight for three blocks, take a right and another three blocks and you're done!" Liar. I swear I went like 9 blocks straight and another 6 after I turned right. They must count blocks funny down there in Evanston.

But I eventually finished. Handed off that slap bracelet to Runner 12 and we were off to try to beat him to the finish line in Chicago traffic (harder than it sounds since he was speedy!). But we did it (barely), ran into the finish line with our teammates and had a mini celebration before heading home. 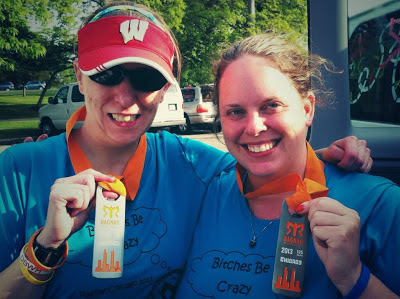 Seriously. Ragnar Chicago 2013 was amazing. I couldn't have asked for a better group of people - many who I already knew, but a few new friends as well - to travel that 200ish miles with. 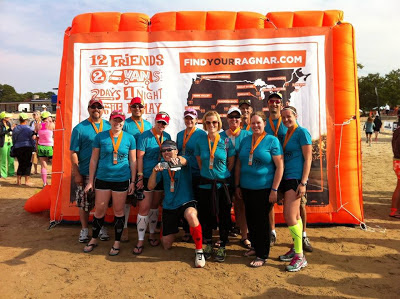 When can we do it again?
Posted by Badgergirl at 9:51 PM

I have been so excited to read your Ragnar report! It sounds like such an amazing weekend. Congratulations on those kills!

That sounds so awesome!
Sarah