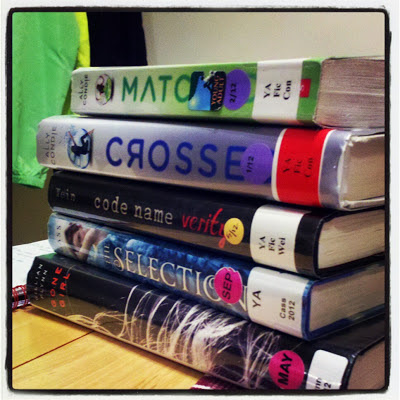 So many books. So little time.

Obviously running took a backseat to reading this month. I logged a total of 35 miles this month in my running shoes and when you remember that 13 of them were during the Tyranena Half Barrel (a race I’ve yet to write a race report for), that’s not a very impressive number.

Tells you I’ve obviously been doing something other than running.

Well. I’m pretty sure you can say I spent most of the time I should have been running curled up in my recliner with my nose in a book. Because man. It was a good month reading-wise.

I finished seven books. Granted, some of them were kind of short – two came in at less than 200 pages each – but still. That was 2,121 pages worth of words that I read. It’s been a LONG time since I polished off that many books in a single month. I can remember hitting six earlier this year, but anything more than that would require too much work. And I don’t have that kind of ambition tonight.

So the seven books. That brings my yearly total to 42 books and 14,655 pages. Considering my yearly goal is 40 books, it’s safe to say I accomplished that when I finished Two Kisses for Maddy: A Memoir of Love and Loss on Nov. 19. Compare it to last year when I’d finished 30 books and 11,018 pages by the end of November.

So what’d I read during November? Take a look:

Passion by Lauren Kate
One Day in the Life of Ivan Denisovich by Alexander Solzhenitsyn
The Giver by Lois Lowry
Thirteen Reasons Why by Jay Asher
Two Kisses for Maddy: A Memoir of Love and Loss by Matthew Logelin
Gone Girl by Gillian Flynn
Matched by Ally Condie

So you see, it was a nice mix. Not all young adult titles this month. :)
I did finally get my one classic in for the year. Can you guess which one? A friend recommended One Day in the Life of Ivan Denisovich. I wanted a somewhat quick read and know that sometimes classics are anything BUT quick reads (Hmmm, can we say Les Miserables?). But at 178 pages, Ivan (yes, after reading about his entire day I'm on a first name basis with Ivan) was just what I was looking for. It wasn’t bad.

A title that I could have done without? That would be book No. 40 for the year  - Two Kisses for Maddy. This is based on a blogger, who created this blog for his newborn daughter after his wife died less than 48 hours after giving birth. The book was born from the blog and honestly? It wasn’t what I was expecting. Kind of that poor me attitude and way more vulgarity than was necessary. Would I recommend it? Probably not.

What I would recommend was Gone Girl. Oh my gosh. I’ve been waiting to get my hands on this from the library for months. I’d heard a lot of good things and the recommendations didn’t disappoint. I flew through this thing in like three days. I seriously couldn’t put it down. Twists. Turns. Unexpected stuff. So. Good.

So what’s up for December? Well the library has continued with typical library behavior. Going for long periods of time without giving me any of my holds and then all of a sudden I had like six of them come in in a span of two or three days. So I’ve got a pile to get through by mid-December. I finished a couple already and have a few more waiting, so at this point I haven’t run out of reading material for the year!
Posted by Badgergirl at 6:56 PM

Email ThisBlogThis!Share to TwitterShare to FacebookShare to Pinterest
Labels: Books

I agree that "Gone Girl" was hard to put down. Very well-written with some twists. And I hated it. The main characters were such miserable excuses for human beings.