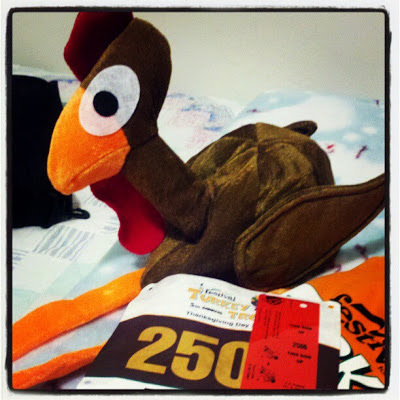 I had plans start my Thanksgiving by heading out for a run with a turkey sitting on my head.

Yes. You read that right. A turkey. On my head.

But that all changed this morning when I heard the howling wind outside the window.

No. No. Don't worry, I still ran the Festival Foods 5-mile Turkey Trot. I just did it without the turkey on my head. Let's just say the turkey wasn't the best head gear when it comes to aerodynamics.

Other than the 20-25 mile wind gusts, it was a perfect morning for a turkey trot. Sunny. Temps in the low 50s. Perfect weather. Just that darn wind.

Oh well. I lined up with the almost 2,500 other runners who were heading out on the 5-mile route and after the national anthem we were off. I've done this race before, but this year it was at a new location, one that had me running through the neighborhood I grew up in.

The first three miles went smoothly. Nothing major. I was just out enjoying a run, and maintaining a decent pace. The last two miles were a bit tough. Probably because I haven't run anything longer than 3 miles since Tyranena almost a month ago.

But I kept running. I threw in a short little walk right after passing the 3 mile marker. I started running again, hit the downhill and the a nice little flat section right along the river.

It should be noted that I saw a lot of people who started out the turkey trot wearing the turkey hats. But either they got to warm or got sick of the turkey head flopping around, because I saw so many of those hats either tied around their waist or their neck. Anywhere but on their heads.

And then right after passing the 4 mile marker, I saw it.

Ugh. I knew it was coming. I just didn't remember this hill being quite so steep. Seriously. Like straight up.

And knowing my IT band still doesn't like hills, if I was smart, I would have slowed up and walked the hill. But I'm stubborn. I pushed ahead and ran. Well, if you could call the shuffle I did up that hill running. But I ran. And then promptly took a 30 second walk break once I hit the top.

I'm pretty sure I deserved it.

I finished up the less three-quarters of a mile, crossed the finish line in 54:56  and collected my free personal sized pumpkin pie. It wasn't my fastest turkey trot, but it was a nice run this morning.

And made feel slightly less guilty about taking that second piece of desert after a Thanksgiving feast today.
Posted by Badgergirl at 7:53 PM

Great job on the race. What have you been doing for your IT band? I have been dealing with some if the same issues.