When we last talked about my trip to Ohio, I had just finished a hot, humid and hilly Capital City Half Marathon.

After a short time at the after race party, we shuffled our way back to the car and drove back to my friend Jeff's house, where we showered, grilled some steaks for lunch, played with the dog and then sat and relaxed for a few hours.

Then it was race time. Again. It was time for the Ultrafit Cinco de Mayo 5K.

Remember, this trip to Ohio included the two races in one day plan - a half marathon in the morning followed by a 5K at night. What? It was Cinco de Mayo and the race organizers promised free margaritas at the finish line. Can't argue when the words free and margarita are in the same sentence.

So off we went to downtown Columbus again.

It was being hosted at the Park Street Cantina, this cute little Mexican place. It was a small race. No road closures, no official timing system and just a coned off lane the width of a bike lane. At most there were 200 runners. Probably less though.

We lined up and all of a sudden the race director yelled "Go" into a bullhorn. Told you it was a small race. Remember how it was hot and humid during the morning's half marathon? Well it was hotter. And more humid. And very few clouds in the sky.

I didn't have time goals. Yes. I wanted to run a decent race. But I also knew my legs were already somewhat trashed. So I went on feel. And the first mile and a half? I felt good. Surprisingly good, actually. As I was nearing the turn around, I spotted Jeff and Peggy, who both looked like they were running strong.

After I hit the turn around I took a short walk break and started running again shortly before I hit the 2 mile marker. Then I realized why the first half felt so good.

I had been running downhill. So it was time to run back up that hill. Ugh.

I alternated running and walking at that point. Honestly, I just wanted to be done and enjoying that margarita. At one point a woman comes up next to me and stops to walk.

"I've bee chasing you for the last mile and I finally caught up to you when you stopped to walk."

I told the woman my legs were trashed and told her the story about the morning's half marathon and this 5K was supposed to be the "fun" way to end the evening.

"Wait. You ran a half marathon this morning and now are running this? You deserve to be able to walk. Very impressive."

I chuckled. Thanked her and since we were coming up with just a half mile to go, I told her good luck and started running again. A few minutes later, I crossed the makeshift finish line in 37:14. I'll take it considering the amount of walking in that last mile and the fact that those were miles 13-16 on my legs that day. 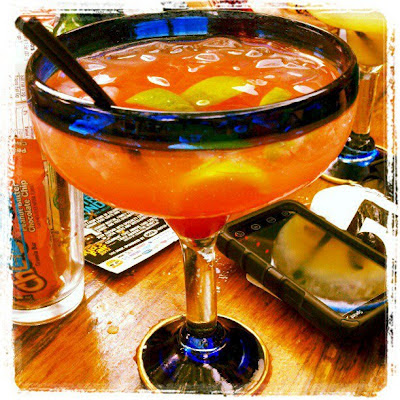 This is how you rehydrate after two races in one day.

Once we were done it was time to stake out a table in the outdoor seating area (right in front of a huge fan - score!), grab a margarita and watch the Kentucky Derby. And while I didn't place a bet on a horse, I did mention before the Derby started that I'll Have Another was my favorite name of the horses racing.
Posted by Badgergirl at 3:32 PM

I think you deserve that giant libation after running a half and 5k on the same day. That's my kind of stupid.