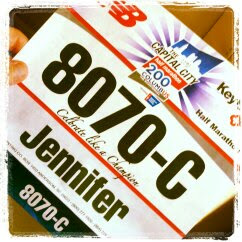 Let's ignore the typo on the bib. Celbrate? Really?

Oh Columbus, Ohio. Where do I begin?

Well, there's the trip from Wisconsin to Ohio, and what we did during the days leading up to the Capital City Half Marathon, but I'll save that for an entirely different post. Same with the 5K we ran hours after the half marathon. They all deserve their own time in the spotlight.

So the half marathon.

First off, Mother Nature was not kind to this Wisconsin girl. It was warm. As in 68 when I lined up in the starting corrals at 7:45 a.m. for the 8 o'clock start. And humid. I knew right then, even before the national anthem was played and the gun went off that this was going to be a tough race. 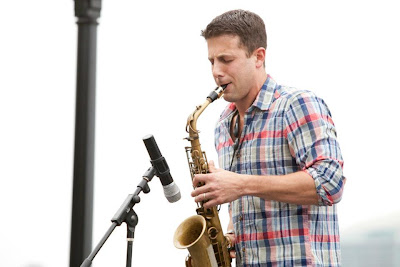 So Jerry DiPizzo plays the national anthem. It was amazing. And the first corral starts. Then w e wait 5 minutes and corral B starts. Then it's time for corral C to shuffle forward to the starting line. Peggy and I shuffled and pretty soon we were running. Across the mat and we were on our way.

Ideally I would have liked to clock a 2:25ish finish, but I also knew I needed to keep it easy in the beginning miles, especially since it was only getting warmer.

By the time I got to the first mile marker about 10 minutes and 30 seconds later, I was already dripping in sweat. Uh-oh. I kept running. Kept it easy. People watched and silently prayed to Mother Nature to just open up the clouds and let it rain, because at least the humidity would go away a bit.

I kept the miles easy and followed my plan of walking through the water stations. The first miles actually went pretty good. I kept my pace in the 10:30-10:45 min/mile range through the first 6.5 miles and was feeling pretty good.

And then it hit me.

I just wanted to be done. But I still had half of the race to run. I wanted to slow down and take an unscheduled walk break between aid stations, but I couldn't. Why you ask? Well considering I was smack dab in the middle of The Ohio State University Campus and wearing Wisconsin Badger gear, that would not have been the smartest decision.

So I kept running. 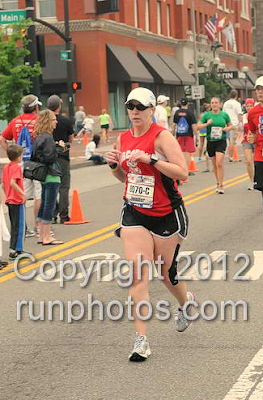 And somewhere around Mile 8 I was finally off the campus and I allowed myself to take that unscheduled walk break. It was the first of many. It's also the point in the race where I started taking two cups of water at the aid stations - one for me to drink and one to pour on my head - because it was starting to get warm.

I kept shuffling along. I watched the 2:20 pace group pass me. Then the 2:25 pace group pass me. I knew this wasn't going to be a stellar result kind of day. I kept running though, sprinkling in some walking breaks (which were probably longer than necessary). 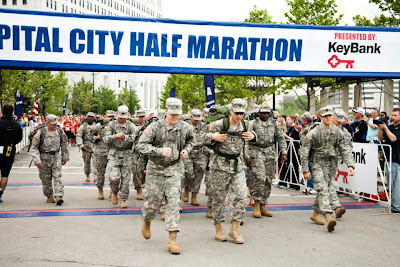 Just before I hit the Mile 10 marker I came upon a group of military guys (I'm not sure which branch they were with). They were outfitted in full fatigues, carrying their full packs and running/walking in their combat boots. It was just before they were about to make the final turn for the 10K route. Pretty inspiring. And the other cool thing? I'm running along and as I come up to these guys, all the runners who were in the vicinity broke out in applause. Very cool.

So seeing that? Even though I was struggling I knew what I was going through was much easier than what those guys were and they weren't complaining. So I kept running. 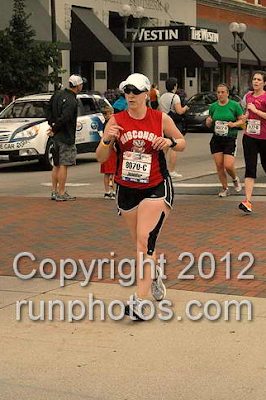 I glanced at my Garmin when I hit the Mile 10 marker and saw it flip  to 2 hours. Well, if ran the last 3.1 miles and didn't stop or slow down, I could still hit a 2:30 half marathon. Hard, but possible. So I tried.

And about a mile later I saw a guy sitting up against a tree with an IV bag hanging from the tree trunk and wearing an oxygen mask. Then I realized. Yes, I had emergency contact info on my Road ID for my mom. But it wouldn't be much help since she was in Wisconsin. My friends Peggy and Jeff? I didn't know their phone numbers. That info was saved in my phone, which was locked up in Jeff's car.

I was feeling a little funky at this point, and given that conversation I just had with myself in my head? I didn't push it. Alternating runs with walks over the final 2 miles. And finally, 2 hours and 42 minutes after I started, I finished. 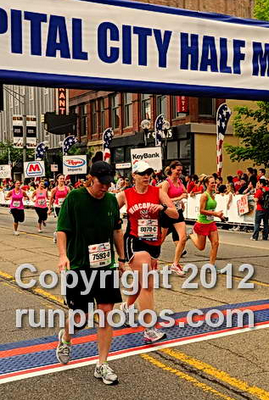 It wasn't the kind of race I hoping to have. It wasn't the prettiest half marathon and it definitely was my slowest half marathon over a year, but given the heat, humidity and all of those freaking false flats? I'll take it. I was also glad to hear from other runners that I wasn't the only one who thought that was a tough 13.1 miles. 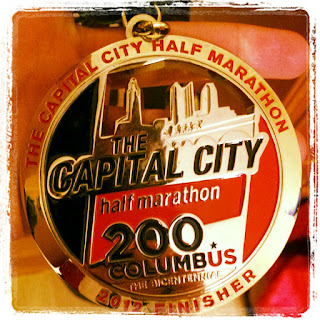 I earned every ounce of this bling.

After a pit stop in the bathrooms for an angry stomach, some sparkling wine and water, Peggy, Jeff and I walked (well, I hobbled), back to the car so we could head back to Jeff's house.

You totally earned that medal! And that military group was super inspiring!

Hey Jen, I know you may not be thrilled with your time BUT you did not stop - you could have - and I am sure that there were plenty of people who did - bit you chose to suck it up and keep running! Way to go!