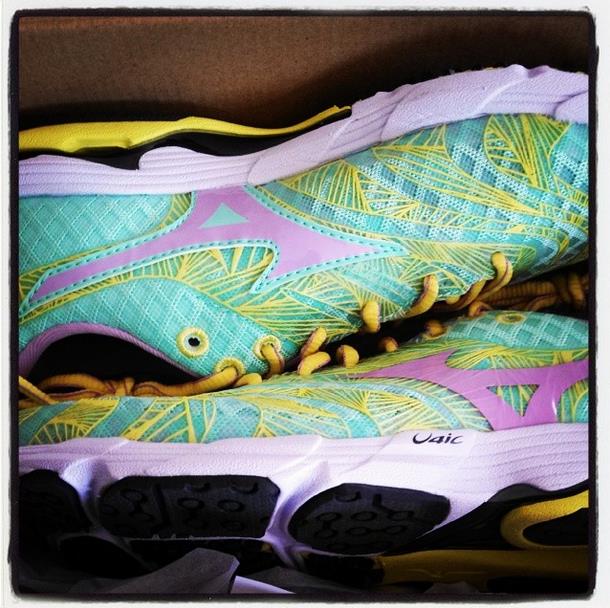 Let's talk about shoes for a few minutes.

I did try to go the minimalist route once. I snagged a pair of Brooks Pure Flows and took them on a 3 mile run. My feet didn't hate them, but that was right when I came down with the really, really nasty IT band issue. And while it probably wasn't due to that 3 mile run, I just couldn't try running in them again.

So it was back to the Ghosts. And my feet - and IT band - have been happy.

But when it came time this spring to get a new pair of shoes, I decided I'd go to Fleet Feet and have an analysis done on my feet, just in case. I mean, it had been like 4 years since I had one done. Plus I'd heard rumblings from other runners with Brooks-loving feet whose feet haven't been as happy with some of the newer models.

So last weekend I went in. I waited my turn and finally it was time to get my feet analyzed. There's no change. I'm still a runner who needs a neutral shoe.

So the clerk goes into the back and brings me out three pairs of shoes to try. She brought the Ghosts just so I could try them. I'm not going to lie. My feet were happy. And it was a pretty snazzy color combo. She brought some Nikes (I'm not sure what model, I forget) and I absolutely hated them.

Then she brought the Mizuno Wave Sayonara.

These things looked like Easter eggs. Talk about fun colors. And when I tried them on, my feet didn't hate them. So I took them for a spin on the sidewalk outside the store. They weren't bad. A little different feeling, but my feet and legs kind of liked them.

So as much as I didn't want to end my relationship with the Ghosts, after a lot of thought and lots of trips up and down the sidewalk, I decided to go with the Mizunos. 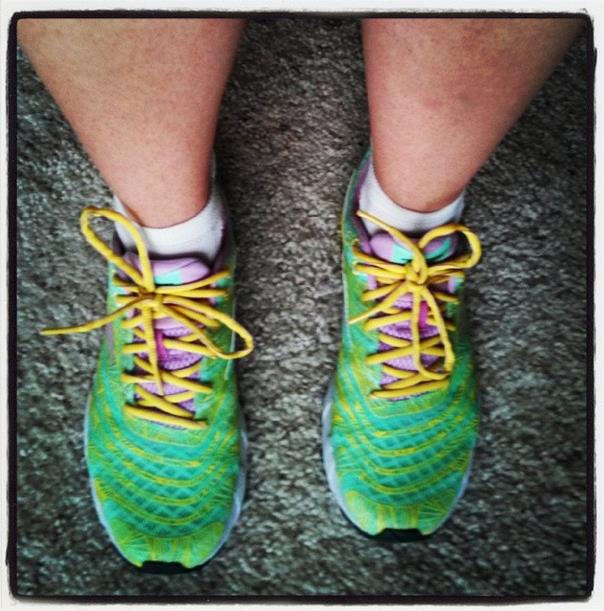 Tonight was my first run in the Mizunos. I'm not going to lie. I was a little nervous. And apparently I had a right to be.

Not even a mile into my run I had to stop, sit down on the curb and retie my shoes. My feet were screaming at me. I don't know if I had the shoes tied too tightly or if my feet just don't like the shoes. I finished up my 3 miles (I had originally wanted to do 4 or 5, but I thought I better stop early given the shoe issue) and I came home.

It was frustrating. On Saturday when I went shoe shopping, my feet didn't seem to mind the Mizunos. I thought they even liked them. Tonight? Oh boy. They were not happy.

I heard from someone they didn't like the Mizunos initially either, but after they broke them in, they fell in love. So I guess I'll keep trying some shorter runs with them. But there's also a part of me that's 90 percent certain I might be making another shoe purchase in the very near future and I might be coming home with the old reliable Ghosts.

Posted by Badgergirl at 8:57 PM

My experience with Mizunos is that that take forever to break in. So hang in there!

I've been happy with the Ghosts for the last year. I tried Mizunos, but returned them. Your shoes are so pretty!!! I wish shoe companies offered a variety of colors in the wides. :(