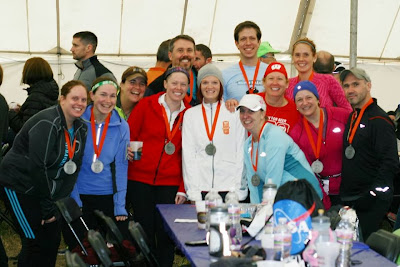 Some of the funnest runner peeps I know.

I ran my fourth and final half marathon of the year on Nov. 2, the Tyranena Beer Run Half Barrel.

This was my second shot at running this race, which is quickly becoming one of my favorite fall races. Maybe it's because of the late start - seriously, an 11:30 a.m. start means I can sleep in my own bed and not have to get up in the dark in order to make the 1.5 hour drive to Lake Mills - or the full lasagna dinner they give you after the race in addition to all the usual post-race snacks. But mostly likely it's the people. Due to its location, this race draws a ton of runners from the Madison and Milwaukee areas, which means of a ton of my friends do it.

So who would argue with running a little race and then hanging with friends for a bit? Not me.

I went into this race with no expectations, other than to run some miles, have fun and hang out with my friends. And you know what? I accomplished every goal.

I ran with my friend Aaron and we ended up leapfrogging our friend Erica throughout the race.

The important things to know?
Then it was time for food, beer and friends. It wasn't my fastest half marathon by far, but it was a fun one.
Posted by Badgergirl at 11:00 AM