A review: "Running the Sahara" 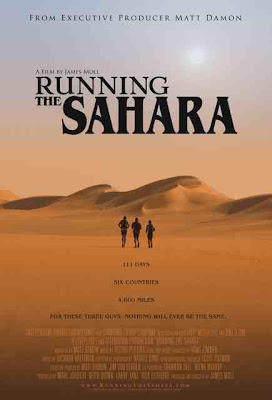 A spectator cheering on the side of the course. Words of encouragement from your family and friends when you tell them about your latest crazy goal. Or maybe just repeating a phrase to yourself, a phrase that keeps you going.

Back in February, Runner Leana asked her blog readers what phrases got us through the tough times. The times when we just wanted to stop. When I'm at the end of a run and it's hurting and I just want to stop, I tend to have the lyrics to Kanye West's "Stronger" going through my mind, particularly "Now that that don't kill me / can only make me strong" or the refrain that repeats throughout, "Work it harder, make it better / do it faster makes us stronger."

A couple of random readers, including me, won a free download of the movie, "Running the Sahara," a movie about the journey of three guys who run 4,300 miles through six countries over the course of 111 days. Their journey begins in Senegal, on the coast of the Atlantic Ocean, and takes them through Mauritania, Mali, Niger, Libya and Egypt, where they end their journey at the Red Sea.

What those three guys did was inspiring. From the miles they logged to the conditions they dealt with. The injuries. The planning. The uncertainty of not knowing if Libya was going to let them enter. All while crossing 4,300 miles. And they never gave up. They knew they had an end point - Egypt and the Red Sea - and they kept going. Kept putting one foot in front of the other. And as a result they accomplished their goal, grew together as teammates and became different men.

While I got something out each minute of the film, I think the part that struck me most was minutes from the end. The runners had accomplished their goal. They had stuck their hands in the Red Sea and their journey was done. Standing on the beach, Ray Zahab was talking about the experience and goals. And what he said really struck me:

"Any limitations we have are ones that we set upon ourselves. If you think you can only run 5 or 10K, you'll only run 5 or 10K. It's where you set those goals, because really there are no boundaries."

It's up to you and me - no one else - to determine what we're capable, or not capable, of doing. Any goal is within reach as long as we believe we can do it.

If you get the chance, watch "Running the Sahara." Everyone - athletes and non-athletes alike - will get something out of it.
Posted by Badgergirl at 8:00 AM

Email ThisBlogThis!Share to TwitterShare to FacebookShare to Pinterest
Labels: ramblings

Glad you enjoyed the movie!!